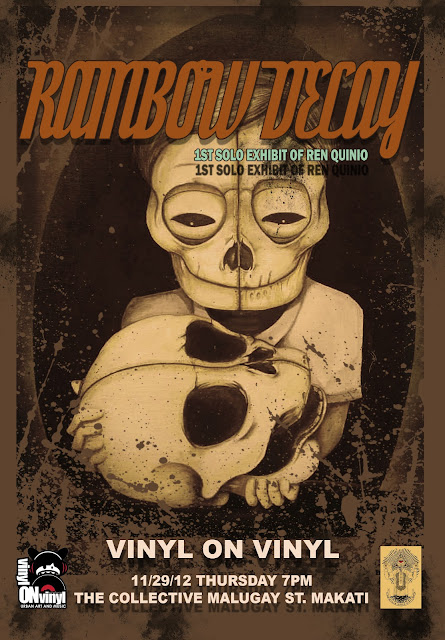 a body of flesh we are, i told you
you answered were not

a gathered fact, in a span of time
defines your existence

but you have said it's not

i asked you
to define
what is you about?

you draw a skull
in his lollipop

were always be the young men, you said
trapped on our rotting bodies
our youth plays, you said
in a coy of living dirty

giving life to dreams
and stories of real time
oh, this is not history in your imagery

when we were skulls
eventually...and literally
soon we'll be powderized
oh so freakin literally

frown not, our bodies travel
on the cosmic
on the mountains
on winter soil
and summer breeze
landing some of our pieces
on someone else's teacups
traveling on their physical bodies
to their imaginations
and dreams

they would say they know you
but they know not
creating another life
of a young boy and his bike
and his cat
and his father
and his chap.


Ren Quinio was born on a not so cloudy day of August, 26 years back. Since knowing how to use his brain on such passion, his room had been flooding out of imaginations and dreams of becoming and having something like this - a solo exhibit of his creations.
Once inspired by street art and still life ( a not so nice combination) he then found his eye for Pop Surreal and Low brow art, creating his own style of bringing out rainbows on a decaying stage of life.

Posted by Vinyl on Vinyl at 4:08 PM No comments:

Going past the SURFACE 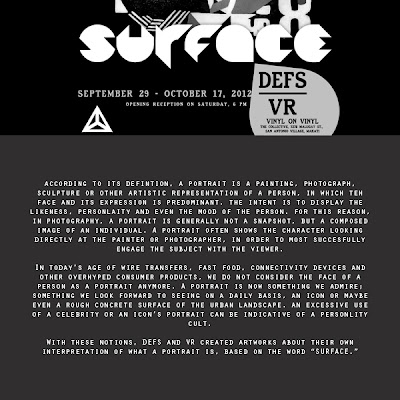 What is a portrait?

Pressed against the black painted walls of Vinyl on Vinyl are portraits of countless characters, with or without a face. From empty frames to seemingly empty silhouettes, the exhibit paints a picture worth a thousand words.

Pilipinas Streets Plan’s very own, DEFS and VR, takes refuge in VOV and redefines the meaning of a portrait. From the plain-Jane notion of a ‘composed image of an individual’ comes a new definition that goes beyond the face of man.  From faces of the flesh to blank surfaces, DEFS and VR creates ‘something admired, something that makes you want to look forward to seeing on a daily basis, and something iconic.’

‘Surface’  was displayed in Vinyl on Vinyl last September 29-October 17, 2012. Pass on by and get re-educated on surfaces and portraits.
Posted by adr91 at 11:49 PM No comments:

A look back into Unstable Mutations 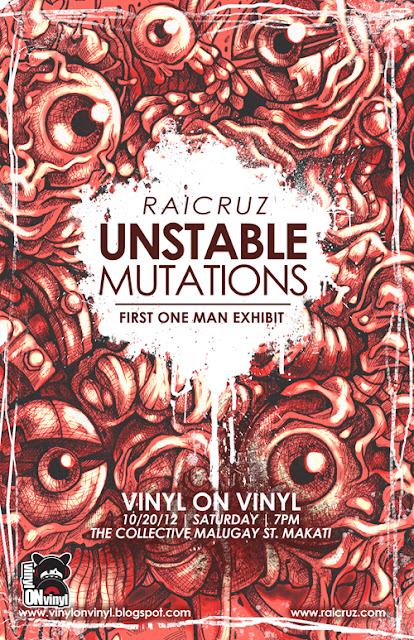 As you come closer and peer into the four walls of vinyl on vinyl, notice it peering back. It cannot be misconstrued, the countless eyes that breathe life into the dark, black walls of the gallery. Take a look and it will take a look back.

Forms, all seemingly familiar yet hauntingly unknown, are sewn together, with no purpose of physical fluidity, weaving threads of irony and creating a harmony of chaotic madness; a fair share of unstable mutations.

With the creeping feeling where the unknown seems familiar, Rai Cruz finds refuge.
Rai Cruz’s one-man show ‘Unstable Mutations’ is nothing short of unforgettable. Bringing street art into the confines of inner space is in itself a feat, but he goes one step further and plays along with all kinds of creatures, from the strange to the even stranger.

For his first one-man show, Rai Cruz has made a pretty big impression.

The task of moving street art from public to private space demands a necessary reassessment of its value. Graffiti after all is necessarily a form of resistance, it’s presence on public walls carrying the weight of rebellion. Its move to the gallery is graffiti’s undoing, where the largeness of street art can only be stunted.

Unstable Mutations is a set of works that do not fall into this trap, even as it is in a gallery, even when its images are borne of the streets. These are not works made smaller by the move into private space, as these are works that co-exist with its larger versions on public walls.

Think of it as an extension of the city streets, the creatures here the new members of the community that public art inevitably builds.

And it is a nation of creatures that grow out of the city’s concreteness, that are borne of its daily grind. Whether large and on public walls, or small and hanging in a gallery, these images speak of a city at the crux of development and destruction, where everything evolves into unknowable and unfamiliar, living and breathing, bodies. Ones that respond to the city’s demands, ones who make up the marginal narratives we do not hear, the people we do not see.

Those who live off our cities become creatures of its undoing and decay. That they seem to be in constant evolution is there instability. That they grow more and more creatively is the gift of urbanity and development. These are the city’s inhabitants we refuse to see, the ones whose noise we do not hear, the ones we leave behind as we enter the comfortable clean walls of the homes we build.

The power of denial is such that we do not know our own reflections.

But we have no choice now. They are here.
Posted by Vinyl on Vinyl at 10:59 PM No comments:

Your days are numbered! 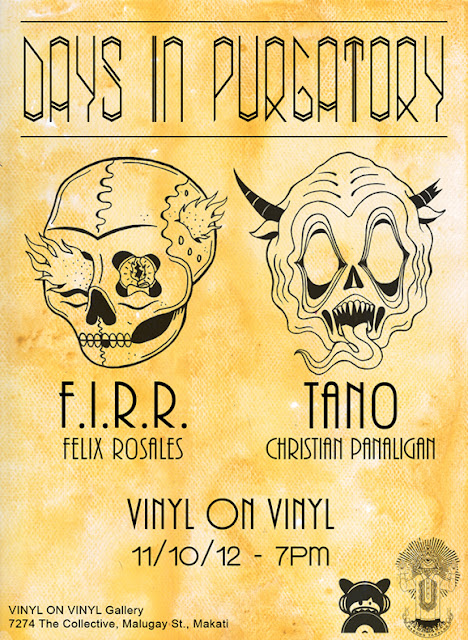