A little bit of Tara 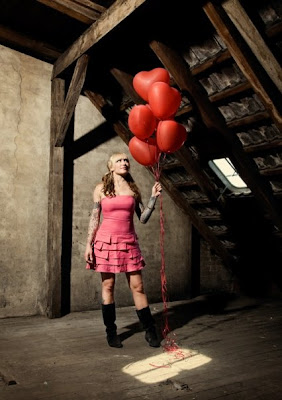 Tara McPherson is an artist based out of New York City. Creating art about people and their odd ways, her characters seem to exude an idealized innocence with a glimpse of hard earned wisdom in their eyes. Recalling many issues from childhood and good old life experience, she creates images that are thought provoking and seductive. People and their relationships are a central theme throughout her work.

Tara exhibits her paintings and serigraphs in fine art galleries all over the world. Named the crown princess of poster art by ELLE Magazine, she has created numerous gig posters for rock bands such as Beck, Modest Mouse, and Melvins. Her array of art also includes creating toys with companies like Kidrobot, Dark Horse, and Toy2R, painted comics and covers for DC Vertigo, advertising and editorial illustrations for companies such as Wyden+Kennedy and Spin Magazine, and teaching a class at Parsons in NYC.
Tara was born in San Francisco in 1976 and raised in Los Angeles. She received her BFA from Art Center in Pasadena, CA in August 2001 with honors in Illustration and a minor in Fine Art. She interned at Rough Draft Studios, working on Matt Groening's "Futurama" during college.

Since this week is going to be all about Tara, we did a little snooping around and stumbled upon this article about her and particularly her Band Poster Art. Enjoy!
Which came first for you: music or art?
I guess they evolved at the same time. I started going to art school at 14 and I started playing bass at 15. But while I was in college, playing took the back burner as I was really focused on painting and drawing and didn't have the time to play music. But right after I graduated I started a band again and have been in them ever since.

How did you start off doing gig posters?
Since I was the artist in the band, and had extra time on my hands because I was still looking for freelance jobs, the band was like, "You do them!" So I started with simple Xerox fliers, but then thought, "Hey, I have all this time and knowledge, so why not make them in colour and have fun with it?" It just grew from there.

Do you choose the bands? Do they choose you?
Its a combo of both. In the beginning I was doing them for specific companies, so I'd pick and upcoming show I wanted to do a poster for, the promotions person would contact the band and get approval for me, then I'd make the poster. Now I've met a lot of people in the music industry so I just ask my friends in bands if they want a poster for a show, or I get contacted by tour managers that are setting up poster series, or by certain promoters.

Does their music inspire your work at all - certain lyrics or emotions?
Yes, always. I usually have to be listening to the band I'm making the poster for while I'm sketching my ideas. It just helps really immerse my thoughts into the feeling and vibe of the music.

What do you love most about working on posters?
The freedom I get to just create anything I want. I have discovered a lot of my characters through poster making, and I can do more whimsical and funny things, where I might not do the same thing in my gallery work.

How easily does the 'business' side of your profession come to you?
For me it's really easy, but it's something so many artists don't consider. It's such a huge part about it all: yes, you are a creative individual, but it's still a business and need the proper attention in that regard. I managed a Japanese anime store for three years before college, where I bought and wholesaled toys, art books, video games and DVDs to stores all over the world. I learnt so much about merchandising, wholesaling and running a business there.

Any idea how many bedrooms and band rooms your work is hanging in?
Wow, not really. But hey, let's do the math... I've done at least 100 posters and art prints, with lets say an average edition amount of 200, so thats like 20,000 prints out in the world! Pretty cool!

What advice would you give people wanting to follow in your footsteps?
I think the magic potion is 1/3 raw talent, 1/3 hard work, and 1/3 luck.
Posted by Vinyl on Vinyl at 3:22 PM No comments:

Featuring 11 of Tara Mcpherson's most iconic Band Posters. This extensive collection dates back from some of her earlier works of 2003 up to her more recent creations. These highly rare posters are all numbered and signed.

To join the auction please contact us through vinylonvinyl@gmail.com
Location: Vinyl on Vinyl-7274 Malugay st, Makati

GREEN DAY
with Jimmy Eat World, Against Me, Flogging Molly

This is printed with Glow in the Dark ink.
Posted by Vinyl on Vinyl at 11:58 AM No comments: 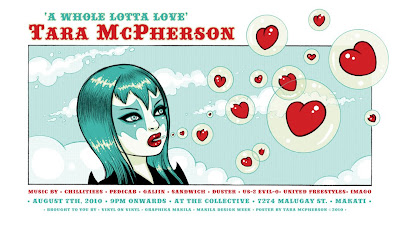 Dubbed as the Princess of Poster Art, Tara Mcpherson rocks Manila with a concert that indulges your passion for Art and Music. She together with Vinyl on Vinyl kicks off Manila Design Week 2010 with "A Whole lotta Love".

Performing are Sandwich, Pedicab, Gajin, Chillitiees, Duster, Us-2 Evil-0, United Freestyles and Imago. The bands will be covering some songs from her Band Posters- Greenday, Supergrass, Rilo Kiley, The Hives, Melvins, Torche, Razorlight, The Futureheads, Blonde Redhead and The Stills. The posters will be displayed in the gallery for everyone to see.

The night will end with the "Not-So-Silent" Auction of Tara's 10 Band posters.

August 7, 2010. 9pm onwards. At The Collective, 7274 Malugay st, Makati. A ton of giveaways and free overflowing Manila Beer. See you there!