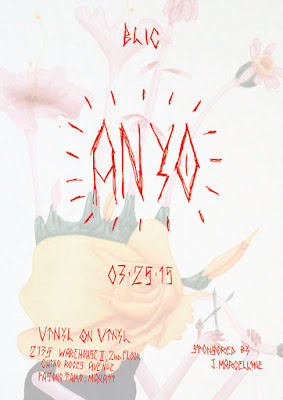 Anyo, Tagalog for appearance, is a unique portrait of urban stories narrated with an inimitable visual language and icon. Blic’s icon- the hand- depicts life and the belief that every life is a story yearning to be told underpins Anyo’s message. By blurring the boundaries between real and imagined as well as perception and perceived, Anyo invites us to identify with a remarkable twenty-first century selfie. Blic’s second gallery exhibit is a significant milestone in a journey borne out of near paralysis and despair. He is a self-taught artist who, like Basquiat and perhaps all other artists, does not think of art when he is painting-but tries to think about life. And he likes to paint on streets. Blic’s inspiration appears varied and bewildering- growing up anxieties, the mundane struggles of life in a “megapolis”, an overgrown playground, a gummy-bear, furry animals or a strawberry smoothie? Regardless, the artworks depict near perfect geometry with attention to height, width and depth. The many forms do not ignore the proportions of skeletal structure- still or moving. As the eye in Anyo#7, with careful mix of color, the artist masterfully adheres to the rigors of light and shade. Anyo unapologetically violates conventions of specific genres. Blic has confidently placed on canvas his vivid imagination and style- demonstrating his maturity as an artist. He has charted his own course and shown that- in Picasso’s words- “If you imagine it, it is real”. To some, at first glimpse, Anyo may appear an eyesore- unworthy of a second glance. Yet Anyo asks the viewer to look again. The artworks challenge the limits of perception as it pushes us to see ourselves and others in the everyday- at a particular place or time. Anyo encourages us to shift our gaze away from the billboards and the handhelds. The blank areas on the canvas are for the viewer to fill in.

Anyo disrupts our self-perception and judgment. Perhaps Anyo#1 says “Shit Happens”. However, by asking the viewer to interpret, Blic says “Shit” does not matter- you do. Anyo uncompromisingly peels away the layers of character and masks- is Anyo#2 a Filipina beauty or lustful lover? And paradoxically, whilst jarring our conscience, Anyo provides an escape from life’s stark realities. Anyo helps understand better the process of creativity as a biological tendency and as a release from inner demons. In doing so, the artworks are not out of place anywhere. Anyo#4 – typhoon or Pasig bathers?- may belong in a child’s bedroom, in a gallery and on the streets. Like graffiti, the artworks do not beg for legitimacy and inclusion- the viewer may find Anyo#6 beneath the sign ‘BAWAL UMIHI DITO’, buffered subsequently by Barangay officials and the ‘vandals’ reprimanded. With Anyo, Blic presents a splashing, clanging, banging, groaning, screeching, thump-thumping, thud-thudding and sometimes silent visual ode to Manila’s inhabitants. Reminding us that they- not the neon, glass, concrete, metal and spaces- are its soul.

Before you walk on by, stop for another look.

Posted by Vinyl on Vinyl at 3:24 PM No comments:

Seduction of the Innocent by Skinner 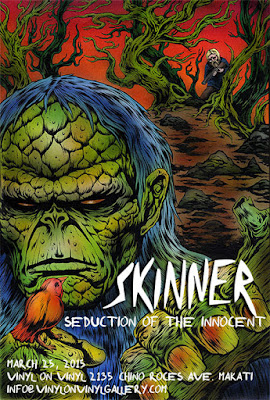 Over the last two months I have been working on paintings for my show at Vinyl On Vinyl in Manila, Philippines. 10 paintings that were to combine my love of silver age comics, the aesthetic style of it influenced from different kinds of comics at the time of the silver age. A little before or after as well, KIRBY/DITKO bombast and action, E.C. Comics creepiness and sci fi weirdness as well as pre silver age stuff of the likes of L.B Cole.

I set out to do some weird comic book panel art that would be fun and easy to do for the show in Manila. It was fun and indulgent even, but something happened as I was painting these.. I was listening to Jack KIRBY interviews on YouTube and after I listened to all of those I was referred to Alan Moore interviews and grant Morrison interviews. The Jack KIRBY interviews fascinated me because I love Jack Kirby and what he has done is sort of mentor me from beyond the grave by providing the most incredible example of blue collar work ethic not to mention how weird and impressive and beautiful his imaginings always are. He’s not called the king for nothing.

Well the Alan Moore and Grant Morrison interviews really set my mind off into a kind of interest in the psycho mental and spiritual involvement that creativity can invoke. A sort of journey beyond the normal dimensions of story concepts and art as an imaginative astronaut willing to take on a mental freedom no matter how bizarre it could be. A few Alan Moore interviews really got me thinking about how important socially active and antagonistic art is. That it is at its best when it is for the people, not the status quo standard of self-congratulating upper art echelons not available to the average joe. It renewed my sense of this, although my modus operandi is to put my art in the hands of anyone if I can.

I then was in a mutational stage of silver age comic book social antagonism, which is ridiculous enough but then I started on the Robert Anton Wilson and Terrence Mckenna interviews. Which completed my journey by bolstering my love of the absurd and the freedom it brings by overthrowing any current form of social niceties and standards as well as kind of opening my mind to the spiritual shift that human beings are capable of spiritual awakening through drugs and consciousness. So of course whatever paintings I was working on by the time I was listening to Terrence McKenna, were completely taking an aggravated stance towards mentally inhibiting institutions, the church, military industrial complexes, etc.

Of course I had to buy a couple of ounces of mushrooms so I could take them when I get back from my trip over seas. Summer is good for hiking and spirit morphing! Haha!! So as I was painting this batch of weird paintings, I realized that a lot of what I was commenting on in these paintings were very Americanized themes and concepts, some emotional and some political. I then thought of how the show was in the Philippines, which is a country that I hear loves aspects of our western culture. I thought of Fredric Wertham who wrote a book called " Seduction of the innocent" in 1954, which all but destroyed the comic book industry in the late 50's. It put EC comics out of business, and the book claimed that comic books were influencing children with horrific themes and violence to be terrible, twisted future criminals. It struck me that what really turns us into twisted versions of what could actually be, a peaceful beautiful organic occurrence on earth, are our warlike behaviors, our social conditioning and standards, our subjugation and mental enslavement via stupid religions of ourselves and others. (There’s a lot more to touch on but let's stick with only a few for now) Comic books don't make for a shitty world. People doing the same dumb shit for generations and continuing the stupidity and lazy minded selfishness because we are addicted to things that work for us as an individual but put others back. We can't evolve if only a couple of people can afford it.

So I named the show "Seduction of The Innocent", an art show of my wacky and critical commentary on some of our collective struggles as well as social/political institutions that I think will never get enough spankings, and laying it out in my favorite art form style, comic books. It has been an incredibly fun exercise into trying new things and pushing myself to do things I never had the discipline to mess with. (I’m looking at you, insane old timey comic fonts) the show starts on March 25th. A few days after my opening in Japan at Mishka Tokyo, which is where we are showing my new window display/installation for them on March 20th. If anybody can come out and see me I’d love to see your face!

Thank you for reading my long pontificating description on how I arrived in a place of total confusion. -Skinner

Posted by Vinyl on Vinyl at 3:17 PM No comments:

Email ThisBlogThis!Share to TwitterShare to FacebookShare to Pinterest
Labels: art, philippines, Seduction of the Innocent, Skinner, vinyl on vinyl 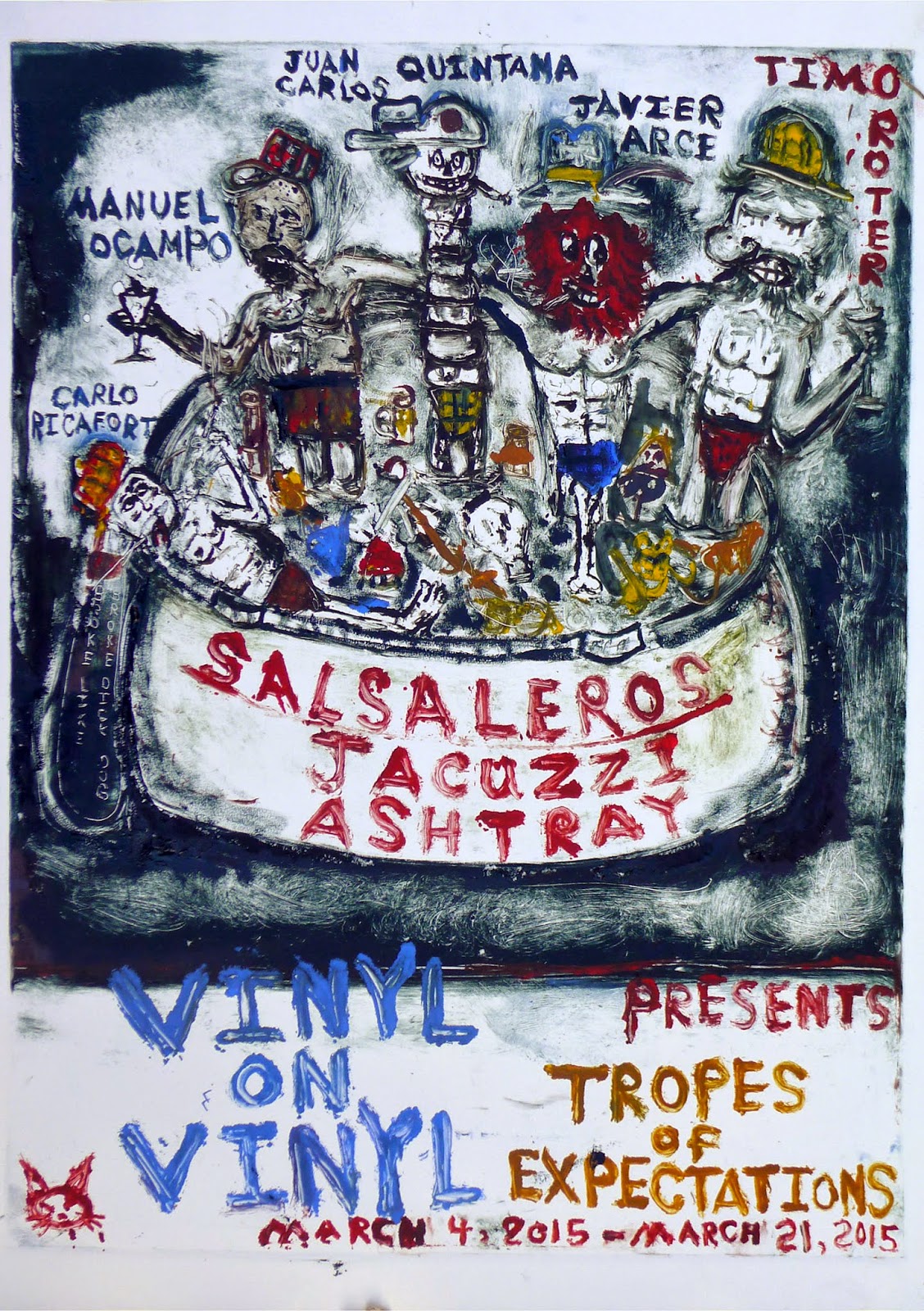 When Private Ricafort, Private Quintana, Private Arce, Private Ocampo and Private Roter met the first time in 1965 it was the hottest December day in the history of Vietnam. Not knowing that there was no right and wrong they were still fighting with General Nguyen, whose nickname for them was Sgt. Sio-Mai, against the intruders.


The 5 were the only guys digging tunnels that time in Cú Chi, listening to b-52's (the band!) when they accidently hit a wormhole with their shovel which threw them into an alternate universe.
General Nguyen was a wealthy man so he cloned the 5 and sent them back home to their places.
Through the telepathic knowledge the 5 got when they entered the alternate universe they are now able to operate and direct their clones and let them paint what they see in their Galaxy.
After 50 years the original 5 met the first time, they are sending now their clones to Manila to have their first groupshow at Vinyl on Vinyl.

Posted by Vinyl on Vinyl at 1:36 AM No comments: