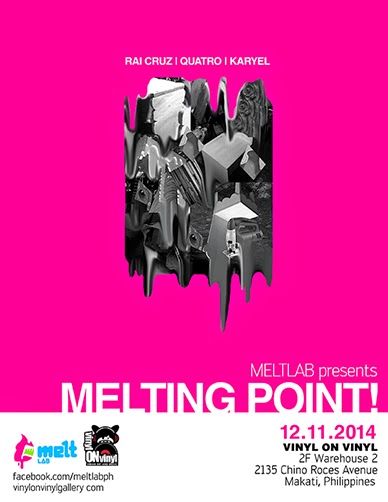 Dec. 11, 2014Vinyl on Vinyl Gallery: Left WingMeltLab is a group of three street artists who have come together based onthe common idea of melting individual boundaries and working together as aunified entity. Their challenge is one that allows them as well to move beyondthe streets that they have individually navigated, to spaces that will engagewith their artistic task of making art that is functional, and is not merelyhung on gallery walls or homes. Rai Cruz, QUATRO (Quatro Los Banos), and TYANG (Carriel Santos) areMeltLab and they work in various forms of art such as: painting, customizingobjects, assemblage, murals, and public art. Their specifice experiences inpublic spaces that has allowed MeltLab to believe in the ability of the visualarts to genuinely connect with people, and their goal as well is to establish abusiness that is a reflection of this belief.Any space – from city streets to home interiors, blank rooms to bars –can be activated by an art piece, one that initiatesand encouragesreflectionand critical thinking. The practice of public art reminds us that whiletelevision and technology have captured people’s attention, spectators engagewith the visual arts differently, where Interaction is one that’s about sittingand staying, and having conversations. MeltLab levels up the spectator’s conversation with art byre-envisioning these as functional and familiar objects such as commonhousehold furniture. It is this combination of normal and standard shapes andfurniture vis a vis the extraordinariness of the visual art that will adorn it,that is at the heart of this project. This exhibition is an antidote to theprevalence of mass produced items, where we trust that an art audience wouldknow to appreciate the value – aesthetic, reflective, thought process behind –one-of-a-kind hand-crafted pieces of functional visual art. MeltLab has long wanted to work beyond the spaces of the streets andbeyond our usual canvasses of wood / cement / paint. Without a doubt, workingon simple functional pieces and reworking these into art pieces can only be alevel-up to the work we usually do. -Katrina Stuart Santiago 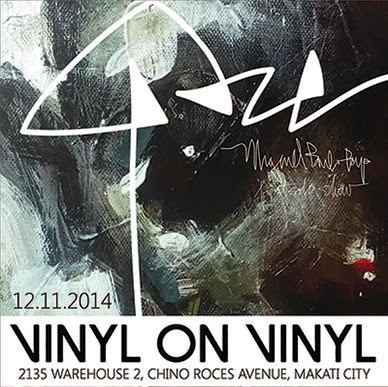 Miguel Paulo BorjaDec. 11, 2014Vinyl on Vinyl Gallery"The gaze sees itself, the gaze surprises me; reduces me to shame. This gaze is not a seen gaze but agaze imagined by me in the field of the Other." ~ Jacques LacanWhen an artist creates art, he brings to life an inanimate object by giving it purpose and projecting himself into his art; and when a viewer gazes into a work of art, who is to say that the artwork does not gazeback, suddenly aware of its purpose, fleeting as it may be.The term gaze is defined as looking steadily and intently at someone or something. This steady look, however, may be a look of admiration, surprise, scrutiny or even a simple thought. A gaze received by the viewer can be interpreted in different ways. The viewer struggles to understand the intent of the persongazing at him and ultimately projecting his own thoughts and ideas onto that person. The gaze acts as mirror that reflects what we want to see and how we want to be seen.As we search for our purpose and meaning in life, we reflect on ourselves by looking at our life in the eyes of another. Objectively and subjectively unwrapping the layers of our past and present, hoping to find something that will define our existence and open our eyes to realities as well as possibilities.In "Gaze", Miguel Paulo Borja imagines a literal depiction of this symbiosis between art and viewer, and ultimately between art and artist as he paints portraits that seem to gaze into the abyss and back at him, sharing questions of their existence and hoping that somewhere out there is a viewer in the abyss thatgazes back.
Posted by Vinyl on Vinyl at 12:29 AM No comments: 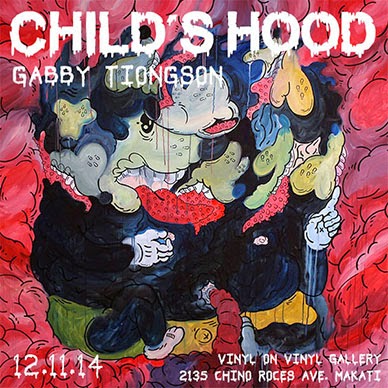 Dec. 11, 2014
Vinyl On Vinyl Main GalleryWe each go through distinct experiences during our childhood. Experiences that mold and impress upon us memories that we unconsciously collect. No matter what walk of life, we all relate to similar emotional experiences during our early years. As children, our innocence allows us to encounter these emotions in its purest form. For example, the bliss felt when we watch our favorite cartoon show. At that moment, nothing else matters in the world. This feeling continues until one grows up and then reality sets in. As adults, we live in the real world while clinging on to that profound happines.Adulthood bears many burdens of the real world. We worry about ourselves, our families, and our security to name a few. Anxiously agonizing over our responsibilities has become the norm. We contemplate on what our futures hold. More often than not, the emotional rollercoaster of life torments adulthood.Tiongson says "I can no longer laugh the same way I used to as a child". His art reminds him of days when ignorance was bliss. He strives to capture and share those moments in his childhood where he genuinely belly laughed his face off without a care in the world.He digs into his childhood memories and reflects it in his art today. For him it is the bliss of play which he holds on to that fuels his creativity. He grew up exposed to 90's toys, cartoons, comics, computer games, movies, and Japanese pop culture.Tiongson thinks of himself as child-like in a sense that he yearns to feel the bliss of childhood. To cope with chasing that fleeting feeling, he surrounds himself with his aesthetics growing up. The immersion into cartoons, toys, music and play are what fills his void. This in turnis used as energy for creative output. His art practice is a journey of nostalgia. Tiongson creates characters that are reminiscent of his childhood but done in a corrupted manner. Whether he consciously or unconsciously does it, it is his way of finding Never land. He is searching for his child's hood that was all about enjoying the moment, an escape to a world wherein there are no bills to pay, no government to worry about, nor a supervirus to beat. He believes that it is his life's purpose to rediscover the bliss, that loss of innocence, and share it with his audience.