Check out the first Collective Art Fair on Feb 25, Saturday 10am onwards at The Collective 7274 Malugay St Makati.
One day of food, art, music, toys, bikes, boards, clothes, bags, accessories, and more!!
Hang out with us! 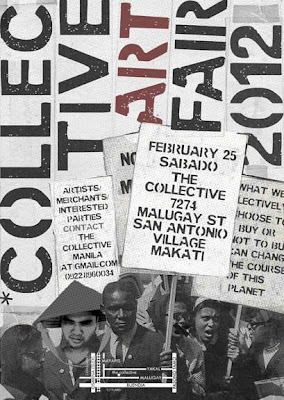 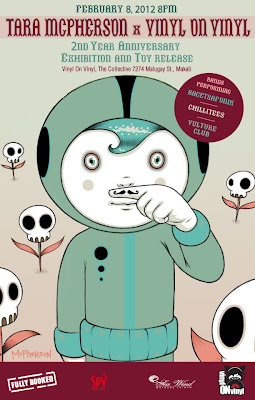 New York-based artist Tara McPherson returns to Manila on February 8-9, 2012. This second visit is brought to you by Vinyl on Vinyl and Fully Booked.

Born in San Francisco in 1976 and raised in Los Angeles, McPherson received her BFA from the Art Center in Pasadena, California in August 2001. She graduated with honors in Illustration and a minor in Fine Art. She interned at Rough Draft Studios, and worked on Matt Groening's Futurama during her college days.

McPherson exhibits her paintings and serigraphs in fine art galleries all over the world. Named the crown princess of poster art by ELLE Magazine, she has created numerous gig posters for acts like Beck, Greenday, Faith No More, Rilo Kiley, and the Melvins. She has also created toys for companies like Kidrobot, Dark Horse, and Toy2R; painting comics and covers for DC Vertigo; advertising and editorial illustrations for companies such as Wyden+Kennedy and Spin Magazine. McPherson also teaches at Parsons in New York.

Her work has appeared in the graphic novel Fables: 1001 Nights of Snowfall. She also did the cover of Bridget Jones’s Diary for the Penguin Tattoo series. Soon, Dark Horse took notice and her first book, Lonely Heart: the Art of Tara McPherson, was subsequently published. This was followed by Lost Constellations; The Art of Tara McPherson Vol II.

McPherson believes in creating art inspired by people and their odd ways. Her characters exude an idealized innocence with hard-earned wisdom glinting in their eyes. She draws inspiration from childhood issues from childhood and life experiences. Her images are thought-provoking and seductive. People and their relationships are a central theme in her work.

On her first visit to Manila in 2010, Mc Pherson gave a talk at the International Multimedia Design Conference Graphika Manila. She also auctioned off several poster designs she did for bands, which local musicians performed covers of. This time, McPherson unveils her third book Bunny in the Moon for the very first time.

The culminating event will take place during Vinyl on Vinyl’s second anniversary celebration, where McPherson will exhibit her original art and unveil a special Toy release, Lucius and Mountains, inspired by her legendary Melvins poster.

For more information, visit the Fully Booked website: www.fullybookedonline.com and the Vinyl on Vinyl blog - vinylonvinyl.blogspot.com.