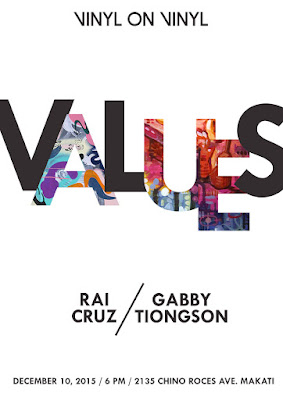 The absence of meaning in art is a rare occurrence. A brush stroke is never empty, a shade hardly hollow. Behind the seemingly uncalculated curations is a strong undertow.

Values are the muses that fuel the human drive and dictate the human creativity. It is the subconscious influence, the North Star that guides the process of an artist and, ultimately, the artist themselves. Art is a direct reflection of the things we hold dear, the things that matter to us, and, at times, the vanishing remnants of values of an era almost forgot, fossils of a value-centric ideal, both simultaneously disappearing and clawing to be remembered at the sprint of the present.

With a divine chaos of color and grit, reminiscent of both pop tart aesthetics and textured memories, Gabby Tiongson and Rai Cruz's "Values" goes back to basics and gets down to what really matters.
​

Posted by Vinyl on Vinyl at 7:10 PM No comments: 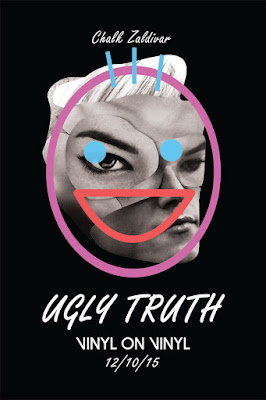 The facade of politeness for the sake of false harmony is put under scrutiny in Chalk Zaldivar's latest series UGLY TRUTH. He presents a satirical take on the forbidden territories of insult and anger in a non-confrontational society such as ours. Sensitivity to negative comments is a common characteristic for humans. The use of niceties and to walk around eggshells to spare another's feeling has become an expectation, if not a requirement.

Criticizing the lack of straightforwardness and also to vent some of his personal frustrations and irritations, he employs exaggerated imagery. For instance, being fat or having overly active sweat glands turn into points of focus that the artist blows up in infinite proportions with the use of his signature style. To receive the full effect of his premise, he pairs each of the pieces equally witty and audacious titles. Taking the idea from stand-up comedians Louis CK, Bill Burr and Ricky Gervais, he exhibits a refreshingly candid and direct approach in expressing his grievances.

He includes a self-portrait to the series, in admittance of his participation in the ridiculousness of this truthfully egoistical habit. Highlighting his own flaws and insecurities, the artist doesn’t spare himself from being part of his own joke.

Zaldivar remains brave and unapologetic in the crassness and the deliberate lack of depth. In protest of people who are oblivious to their own shallowness, he presents the premise that perhaps it is okay to be so. And that it is good, if not even healthy, to release and admit the tension rather than internalize for the sake of political correctness.
​
Posted by Vinyl on Vinyl at 7:05 PM No comments: 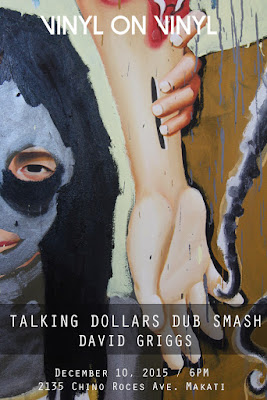 TALKING DOLLARS DUB SMASH mixes iconography from Griggs’ fascination with the Wild West with Horror and with his own irrational thoughts. What we get is an eclectic yet democratic collection of paintings that seems to harness the pure primal element of painting. Griggs, being Australian by birth is talking in Dollars although he really should be talking in Kings. Being a direct ancestor of a British convict convicted of buggery in 1822 and sent to Van Diemen’s Land. Griggs uses what he calls “this irrelevant trivia of my origin” as a way to completely ignore “the current trends of making work about ones identity, I find it very silly” Although the fact of its mention can allow us to think that Griggs is indeed confronting his identity, or lack of his care towards it. Either way TALKING DOLLARS DUB SMASH gives us a glimpse into Griggs’ strange world where dub smashing to Hip Hop, painting cow skulls one day then painting penises the next does make one wonder.
Posted by Vinyl on Vinyl at 7:02 PM No comments: