I Wonder How You Are by Kelli Maeshiro 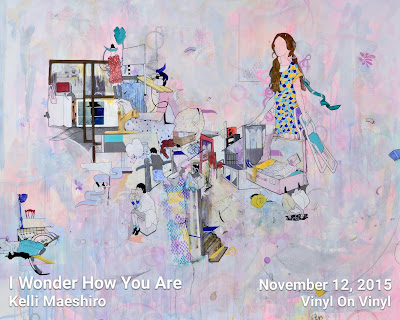 Traveling across multiple metropolitan cities, Kelli Maeshiro has met a variety of people, many who became friends. But as Kelli was constantly on the move, time and distance widened the proximity to the people she knew. She missed her relationships with the friends and acquaintances she used to see. The concept for I wonder how you are comes from the artist’s recollections of the people she has met along her travels but will never see again. In everyday moments away from home, Kelli found herself writing imaginary letters to the memories she had of people she once knew. She began each letter by asking “I wonder how you are?” to the memories she had of a specific individual. In those letters, Kelli discovered the most honest side of herself. The letters became a space of reflection where she could reminisce about the mistakes, regrets, and uncertainties in her relationships with people—past, present, and future.

The paintings in I wonder how you are capture the artist’s memories of the people to whom she writes. The layers of hazy color washes and hard outlines depict strong snapshots of quickly passing moments combined with her memories, grown misty with time. In this series, Kelli composed each letter and painting simultaneously, choosing images for the painting at the same time that she penned the letter. She added or subtracted elements to and from each painting by filtering it through her memories, aesthetics, and senses. Each painting in the series corresponds to unique objects or characteristics associated with the memories of that person, and the back of each painting contains Kelli’s unsent letter.

The basis of Kelli’s work relies on the reflection of personal experiences and relationships. She regrets missed opportunities to get to know someone, and as she grows older, has recognized the value of those missed opportunities. She thinks of her own work as sentimental. She believes that people are sentimental about the things or time they miss—these sentimental self-reflections are what her paintings address. The paintings in this series can be read as soft and hazy, like distant memories. We recreate memories as we remember them in the present, and may think of them differently in the future. In our memories, we forget parts of what really happened, and stories become fragmented and then pieced back together with truth and a small dose of fiction. Kelli’s letters in this series are the same as these kinds of memories. They are parts and pieces of a person, infused with her thoughts and reflection, filtered from her perspective. In this way, her work offers an honestly raw and refreshing perspective on our relationship to memory.

Kelli Maeshiro is a Japanese-American born in Japan and raised in Hawai‘i. She worked in Tokyo, Boston, Portland, and currently resides in Manila and Honolulu. She earned her BA in studio art at Willamette University. I wonder how you are is her first solo show in Manila. She has previously worked as an in-house marketing/magazine designer/photographer, and the combination of magazine, design, and photography experience has influenced her current work.

Email ThisBlogThis!Share to TwitterShare to FacebookShare to Pinterest
Labels: I Wonder How You Are, Kelli Maeshiro, Vinyl in Vinyl