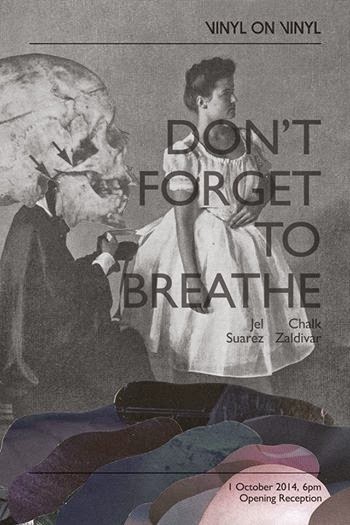 In Akira Kurosawa’s Dreams, the master filmmaker reached inward to create a film that was built upon the dreams that he had over the years. The film was Kurosawa’s way of exploring different stages of his life, creating an artistic portrayal that favored visual splendor than dialogue. Dreams long been a major source of inspiration for different forms of art and in Don’t Forget to Breathe, artists Jel Suarez and Chalk Zaldivar recorded their dreams for a month and translated them through a series of collages that aim to show the humor, profound tragedy, and strangeness of their hidden fears and desires.

Suarez’s work aims to organize her thoughts through her collages in creating a visual narrative, while Zaldivar’s work ridicules the notion of his dreams. The medium that they use creates a stark separation between the two: Zaldivar utilizes odd shapes and colors cut from glossy modern magazines, while Suarez creates scenes from intricately cut objects and characters from old magazines and forgotten textbooks. Suarez revels in black and white subjects and imagery while Zaldivar shows zest with his colorful cut-outs.

Don’t Forget to Breathe is capped off with a dreamy, animated video installation that combines the two artists’ cut-outs to create a singular vision. The video is a colossal piece that shows the conflicts, the zigs, and the zags found inside the two minds that form this show.

Click the links below for photos of the artworks: